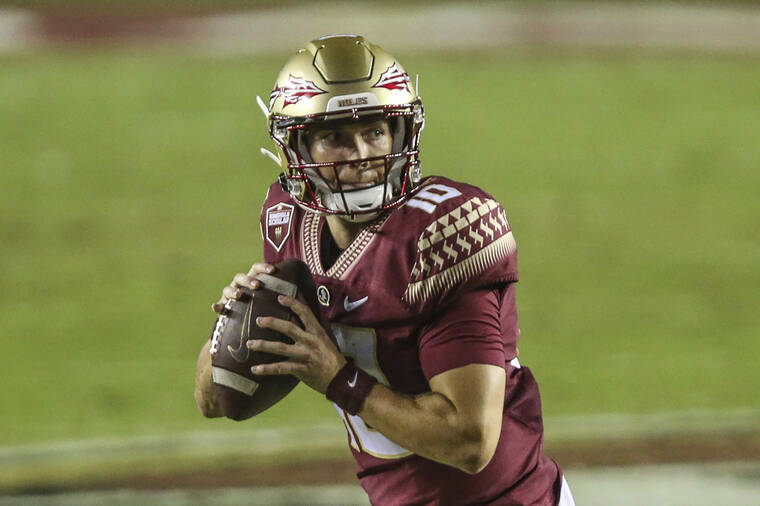 Florida State quarterback — and former Mililani High School star — McKenzie Milton and Clemson receiver Justyn Ross, both of whom faced potentially career-threatening injuries, are among the nominees for college football’s Comeback Player of the Year award.

Milton was one of the latest nominees announced this week for the 4-year-old award presented by the Mayo Clinic that honors a player who recovered from a serious injury to play college football at a high level again.

The winners will be recognized at the Fiesta Bowl on Jan. 1 in Glendale, Arizona.

Ross missed all of last season after having surgery to correct a congenital fusion in his spine. The senior returned this year and is leading the Tigers in catches with 23 and touchdowns with three.

Milton’s return has been nothing short of miraculous. He was a Heisman Trophy contender for UCF in 2018, when he suffered an injury to his right leg the day after Thanksgiving against rival South Florida.

Doctors were concerned the injury was so severe it could cost Milton his leg. Surgery saved the leg and Milton was told his long-term goal should be to walk normally without pain.

He was determined to play football again, even if doctors believed the chances to be remote at best.

Milton spent two seasons rehabbing and working with teammates at UCF before deciding to transfer this year to Florida State.

He began the season as the No. 2 quarterback for the Seminoles but was thrust into action late in the season opener against Notre Dame game when Jordan Travis had his helmet knocked off.

“Nobody has ever come back from an injury like this,” Milton said after that game. “It’s the answer of prayer. Thousands of people praying for me. Coaches believing in me. I’m not here without all the prayers and people believing in me.”

The Seminoles have struggled at 1-4, but Milton has played in four games, throwing for 548 yards, two touchdowns and four interceptions.

“The opportunity to be out there is amazing,” Milton told reporters last month. “I’m grateful for it.”